This time I’m at the 15th international conference of the Association for German Scholarly Editing (Arbeitsgemeinschaft für germanistische Edition, short AG-Edition) – titled “On the Uses of Editions” – held at the RWTH Aachen, Germany, and hosted by the institute for German Studies and Literary Studies and its current head of department, Thomas Bein.

I participated in the last 3 “big” conferences of the AG-Edition (2008, 2010, 2012) and one smaller one (2011) and presented at 2 big ones and gave a plenary talk at the smaller conference, and I’m acquainted with a lot of my fellow editors, textual scholars, and philologists (and musicologists). However, this time I perceived the event in a somewhat different light, perhaps (also) because of the many voices of outrage on blogs and twitter (#allmalepanel) by fellow academics bitterly pointing out the still unequal ratio of male and female persons in academia, especially in the humanities.

A quick glance at the audience and list of presenters confirmed the general observations in the field. However, I don’t want this to be just about an all subjective impression, so I will provide some numbers.

1. I analysed the updated and edited pdf-version of the printed programme & conference schedule with regard to gender of the presenters (Sektionsvorträge), the panel chairs (Moderation), the keynote speakers (Plenarvorträge), and named organiser(s). The programme is online here (pdf).

2. I also looked at the female/male-ratio in co-presentations (there were not that many since this is still uncommon in the German humanities context),

3. and I looked at – if they were talking about author editions or historical editors – at the gender of these actors.

I. Organisation: the only explicitely named organiser of the 4-day international conference was male. The initial co-organiser, who passed away last autumn, was male, too. With one exception, all of the non-explicitely named organisers (i.e. the “assistants”) were female. If I remember the brief introduction of the team at the beginning of the conference correctly, they were 4 female assistants and 1 male assistant. However, these numbers cannot be found on the programme.

II. Chairs of panels (Moderation): there were 15 panel chairs / moderators, of them a total of 6 female and 9 male. That doesn’t look too bad, however, of the 4 plenary or keynote sections (Plenum) only 1 was chaired by a female. With regard to this, the overall ratio of moderators of panel sections (Sektionen) is 5 female : 6 male. 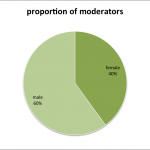 III. The opening session (Gruß- und Eröffnungsworte) – including the Dean of the faculty, the organiser of the conference and the spokesperson of the AG-Edition – was all male, incl. the moderator. And the immediately following 4 keynotes that made the first day of the conference were also all male. 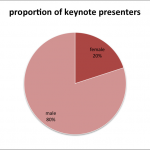 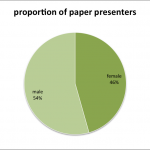 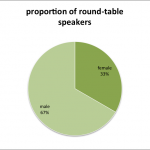 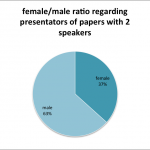 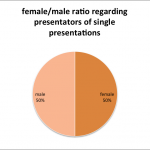 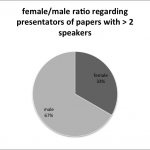 Let’s have a look at the total numbers: 88 people actively participated at the conference with some sort of coherent contribution (not regarding contributions in discussions due to lack of data). 33 of them were female: a little more than a third (37,5%). 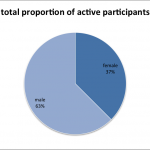 I did another calculation, this time adding up the “speaking time”. This data is more or less constructed (not observed) because I didn’t messure actual speaking time nor did I attend all presentations to know what portion of time each presenter actually had in the co-presented papers. I also summed up speaking time for the panel chairs by rule of thumb (5 min per panel), assigned each single panel section presenter a total of 20 min speaking time while keynote presenters got 30 min each. Co-presented papers were divided by the number of speakers (20 min divided by 2 speakers equals 10 min each), although the actual ratio might have varied. Let’s see what we get:

Total speaking time sums up to 1465 min or roughly 1 day and 30 min of talking! (That might also explain my headache…)

Among the presentations that mentioned a poet, writer or historical editor or focused primarily on one distinguishable historical person, a sad total of ONE was about a female poet, Ingeborg Bachmann. The 26 other historical persons I could find out were all male.

So, what now? I think this little reckoning doesn’t show anything new or totally unexpected. What makes it worse, I suppose. It’s still not as bad as it is in the natural sciences or in technical / engineering sciences, however, that doesn’t make me feel especially happy about it. – I would suggest that future organisers and organising teams take this and complementary observations actively into account in their decision making process when it comes to who to ask and invite for what kind of presentation or contribution. It is not about deciding whether to invite a qualified speaker or a women. It is to acknowledge that women are equally qualified. They’re as good researchers as their male colleagues. They’re as good scholarly editors as their male colleagues. (And they’re as good writers and as worthy of being scholary edited and ‘canonised’). I’m not one to speculate about a conspiracy actively and consciously considering female (or better: non-male) researchers and scholarly editors less than their male colleagues, but next time you come up with an all- or almost-all-male plenary, keynote session, or panel, you should seriously question the decision making that led to it.

Some useful links to quantitative studies regarding female/male ratio: