END_OF_DOCUMENT_TOKEN_TO_BE_REPLACED

What Do You Do With 375.000 Digitised Norwegian Books?

02. March 2015 · Comments Off on What Do You Do With 375.000 Digitised Norwegian Books? · Categories: Conference Report, Digital Humanities · Tags: #DHOslo, quantitative methods, topic modeling

On 24. and 25. February, the Digital Humanities Forum at the University of Oslo hosted two half-day seminars focussing especially on digital textual studies. The first instance was a joint seminar with the newly established Digital Humanities Center at Gothenburg University and the Digital Humanities Lab Denmark. Gathered under the topic “litteraturforskning og digitale verktøy” (literary studies and digital tools), Jon Haarberg (University of Oslo), Jenny Bergenmar, Mats Malm and Sverker Lundin (Gothenburg University) shared their experiences with digitisation, digital editing, electronic literature and textual analysis. Among the presented projects were the digital edition of Petter Dass’ catechism songs, Språkbanken and Litteraturbanken (Swedish), the Women Writers Network and poeter.se, the largest Swedish online platform and archive for modern poetry and writing. Bergenmar and Malm also presented the new DH center at Gothenburg University and their future plans for a master programme in DH. The Swedes startet a seminar series on DH in the fall semester 2014 that will continue in 2015. 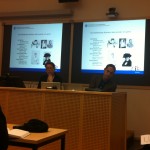 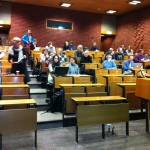 After a lively discussion with the audience, this time’s DH Forum host Anne Birgitte Rønning and I proposed a hands-on workshop for topic modeling to be held at the University of Oslo in the near future, and the current vice dean for research, Ellen Rees, announced the re-animation of the interdisciplinary research group “tekstutgivelse” (text editing & publishing) that will serve as a link between the National Library’s digital corpus and the Department for Linguistic and Scandinavian Languages’ corpus-based research and teaching and hopes to stimulate digital textual analysis endeavours.

I also did some live-tweeting during the seminars: #DHOslo