Collaborate! – A Visit to Forskningsparken

30. May 2015 · Comments Off on Collaborate! – A Visit to Forskningsparken · Categories: Digital Humanities · Tags: #DHOslo, software, theory of mind

As a generally curious person – and as a Digital Humanities networker at UiO – I like to explore new fields and places, sideways, and the lesser-travelled paths. I also like to meet new people. A little while ago, a friend and colleague introduced me to an DH-affine researcher who just finished her Ph.D. in comparative literature and was visiting Oslo. We met, because I wanted to find out more about what she was working on and because meeting literary studies people with a strong DH-angle is always fruitful (and we are a small, sworn community, where it is actually possible to know almost everyone involved which makes communication and collaboration so much easier!). The social meeting, to which both of us invited a colleague, turned out to be very nice – and I met another Oslo-based fellow traveller: this one geographically much closer but disciplinary quite far from where I’m at home: from informatics, especially: information and knowledge modeling. Well, not that far when you take a step back (I study communication; they do, too), but quite far when you believe in the ‘traditional’ distinction between ‘the humanities’ and the ‘natural sciences’ (and their respective ways of thinking). The conversation got me very interested in what is going on at the informatics department at UiO and I invited myself for a coffee and a tour! 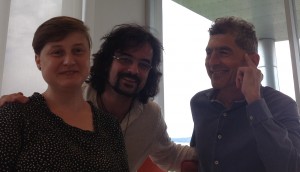 Last Tuesday I took a stroll from the humanities campus (south of the Oslo city metro-line) to Forskningsparken (north of the metro-line), where the computer and tech people live (and a couple of drones, too!). Here I met with Sasha Rudan and – briefly – Dino Karabeg, who told me about their research and projects and ideas and plans and I did the same. As it turned out, we had a lot to discuss regarding collaboration, the process of (scientific) knowledge production and distribution, creativity, and sharing. They’re working on an impressive project called CollaboScience

CollaboScience is a platform and a paradigm for practicing collaborative scientific research and dialogue, designed (and developed) by ChaOS and Knowledge Federation (it is part of our Open-Systemic Design initiative)

I have to admit: I have yet to find out – or rather: explore! – the full dimension and capability of these. But I see an adaptive idea developing in my mind which I will keep tossing and turning until it is ripe to be tested within my current research on scholarly communities, their (published) communication, esp. their (discipline-specific?) modes of reasoning, their argumentation, and negotiation – not so much of truth claims but rather of the scholarly ‘how to…’ and the (implicit) normative assumptions and presuppositions of their research.

Dino and Sasha have invited me to collaborate on their project using CollaboScience and engaging in an explorative process that started at their Tesla and the Nature of Creativity event in Belgrade, April 2015. Today was the ‘barn raising’ event via GoToMeeting (a virtual conferencing tool) and DebateGraph (the virtual working environment) and a rather large and geographically wide-spread group is working on the project for one week, while KnAllEdge maps what we’re doing in real-time…! I’m excited! I suggested to take the role of an observer (I still feel a bit too unfamiliar within this framework, but I’m open!), and I will see to do some learning by doing and developing my ideas into something I can make use of – and of course: they can make use of within their project.

I also see this involvement as a first step to open to DH network at UiO to the informatics side (we are ‘digital’ anyway) and I believe both sides (of the devided-by-the-Oslo-city-metro-line campus) will profit from this one way or the other. A first step could be a presentation of KnAllEdge (and CollaboScience as a use case) within the Digital Humanities Forum in the fall semester.