It’s been 4 years since my last annual international DH conference (in Hamburg), so it was about time! Kraków seemed reasonably close and affordable, and even though I had not submitted a proposal for a presentation myself, the preliminary programme and this year’s ‘hot topics’ were intriguing enough to give it a ‘participation only’ go! Also, a DH international conference is a great way to meet all the people I usually interact with online only live and in person!

Even though I had been entertaining the idea of immersing myself in stylometry and computer aided/assisted textual analysis, I ended up with a different choice of topic: High End Virtual Reality / Augmented Reality / 3D Modelling – with a number of sessions spread over 2 days on a variety of projects. Since I am planning a large(r) scale project in VR/AR myself, it seemed wise to check out the field and see what others are up to, what tech they use and have experience with, and how their projects are and were received by the DH and non-DH scientific community.

I was most impressed by the following presentations:

The most impressive, I have to say, was the Virtual Harlem Project! I will review this project thoroughly as well as take a closer look at the different approaches and alternative solutions to problems of visualization in other projects when I map out my own ideas.

Apart from the engaging content, I had the opportunity to catch up with old friends and colleagues as well as meet new ones, make plans for collaborations and pitched some DH ideas, promoted the upcoming DHN conference in Gothenburg and gathered people for an informal lunch meeting of friends and members of DHN!

And since the DH conference was going on in the same week the now viral augmented reality game Pokemon Go was released, of course me and a couple of friendly technophiles teamed up to ‘catch ’em all’ – right in the foyer of the venerable Jagiellonian University, our most hospital and welcoming host institution :) 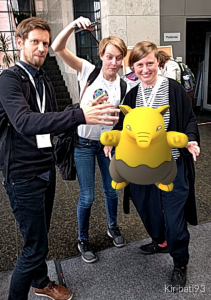 Rare Appearance of Three Digital Humanists Trying to Catch a Drowzee That Spawned in the Foyer of the Jagiellonian University, Krakow, Poland

I am happy to announce that my article ‘Paratext’ und Neue Medien. Probleme und Perspektiven eines Begriffstransfers (Paratext and New Media. Problems and Perspectives of a Conceptual Transfer) has been published with the online journal PhiN – Philologie im Netz. It is my first open access publication which makes me especially proud!

You can read the complete article for free here: http://www.phin.de/phin76/p76i.htm. It is in German, though.

Are there paratexts in the realm of new (audio-visual, digital) media; and, if so, which? Focusing on conceptual analysis and terminological clarification, I try to show that any answer to these questions will depend on the underlying definition of the pivotal term ‘paratext’. Someone simply assuming the definitional criteria originally suggested by Gérard Genette will end up with a different answer (and a different set of ‘media paratexts’) than someone putting forward their very own stipulative definition of the term. I argue that, for the sake of communicative clarity and mutual understanding, it is crucial to explicitly bring to mind the correlation between terminological determinations, practical deliberations and empirical research, and to map the prospects of and limits to the conceptual transfer in question.

I have elaborated on the concept of ‘paratext’ in earlier articles, namely the 2009 journal publication Typographie als Paratext? Anmerkungen zu einer terminologischen Konfusion (Typography as Paratext? Remarks on a Terminological Confusion), co-authored with Per Röcken and more recently the 2014 book chapter Video Game Framings. In: Examining Paratextual Theory and its Applications in Digital Culture. Edited by Nadine Desrochers & Daniel Apollon. ()

END_OF_DOCUMENT_TOKEN_TO_BE_REPLACED

My chapter contribution to the anthology “Examining Paratextual Theory and Its Applications in Digital Culture“, edited by Nadine Desrochers (Université de Montréal, Canada) and Daniel Apollon (University of Bergen, Norway) has been published by IGI Global (promised for April 2014, actually accessible since January 2015). The book which contains 16 chapters and an introductory part by the editors tries to cover a broad variety of disciplines (mostly in the humanities with some social sciences and information science) and tackles the often rather vaguely employed concept of paratext or paratextuality, respectively, in ‘digital culture’, meaning anything from electronic literature, to new media, from video games to online pornography platforms and from digital ‘objects’ to fanfiction in online forums.

This chapter discusses the applicability of the concept of ‘paratext’ (as coined by Gérard Genette) to audio-visual media in general and to video games in particular. In the first section, some potential elements of a video game’s ‘paratext’ are singled out by means of ‘auto-ethnographic’ description of the introductory sequence(s) of the first-person shooter game BioShock Infinite. Several segments of the game’s ‘threshold’ are differentiated employing a rather tentative ad-hoc terminology. In the second section, Genette’s definitional stipulations, posing the point of reference for everyone actually using the term ‘paratext,’ are reconstructed, clarified and constructively criticized. Here, the author also discusses potential objections to Genette’s definitional criteria and briefly touches upon some media-theoretical constraints of his approach. Ensuing from these meta-terminological considerations, the author turns to the questionable use of ‘paratext’ in video game studies. As critical examination reveals, the terminology in this field of research is rather vaguely connected to, and sometimes even completely detached from, Genette’s definition. As an objection to such redefinitions of the term, the chapter suggests (1) that its use be restricted to communicative signals meeting the following criteria only: (a) functionally subservient to (which obviously implies specifically referring to) ‘the game proper,’ (b) authorized by entitled members of the game’s production collective, (c) verbal, (d) (at least partly) extra-diegetic. Additionally, (2) the chapter proposes supplementing ‘paratext’ as an analytical tool with the higher-order umbrella term ‘framings’ (as coined by Werner Wolf).

The chapter is a close reading of Genette’s main terminological contributions to the concept of ‘paratext’ and an in-depth, analytical discussion of it and it’s appropriation, especially in new media studies. It will thus, hopefully (I dare say!), be an incentive to a discussion that is notably absent but necessary nonetheless. – If you’re only interested in the terminological clarifications and the discussion of the concept and its appropriation, you can skip the first part. However, if you want to follow me along entering the video game world of Bioshock Infinite™ in an auto-ethnographic narrative, you should definitely immerse yourself in part 1!

You can purchase the article or the complete book at IGI Global’s webshop. But I suggest that if you’re interested in my contribution and don’t want to or simply cannot afford to purchase it, to ask me and I will gladly provide you with a personal copy! Just send me an email!

Ad Fontes, or: What to Apply When Applying ‘Paratext’ to Video Games

Few weeks ago, August 28–29, I was invited to the beautiful city of Bergen, Norway, to participate in a small scale workshop on “Paratext in Digital Culture: Is Paratext Becoming the Story?”, an event hosted by the research group “Digital Culture” (formerly known as “humanistisk informatikk”) at the University of Bergen.

The August workshop was the final event in a series that started in December 2012 that led to the forthcoming anthology “Examining Paratextual Theory and its Applications in Digital Culture” (IGI Global). I contributed to this anthology with the discussion of the applicability of the Genettian concept of paratext to the analysis of video games – with a brief, critical look at the more or less fruitful attempts to apply the concept in new media studies.

I presented my thoughts and deliberations on the subject in a promotional talk during the workshop (with material from the first-person shooter horror survival game Bioshock) that inspired an intense discussion.

The anthology will be published within the next few weeks or so, so stay put! I’ll send out pdfs of my chapter, “Video Game Framings” upon request.