A Thought Experiment on Scholarly Editing and ‘Discourse’

A while ago I, when German edition philology had become saturated by French post-structuralist ‘theory’, there was – here a there – some whispered talk about a ‘Diskursedition’ or discourse edition. Nothing concrete had been presented or published yet, but the idea had been tossed around, though in a very early stage of conception. So I decided to investigate the issue within my larger project on Editorial Pluralism – and since there were no actual examples of discourse editions or edited ‘discourse(s)’ around, I came up with a thought experiment instead: How would an endeavour like that of ‘editing a discourse’ look like? How would it have to be conceptualized, framed, justified and then: realized? What would the specific challenges be, and what (new/different) kinds of answers would it help find? More so: given the notorious vagueness of the term and of the concept ‘discourse’ (as coined by Michel Foucault and then wildly appropriated), what would serve as the object(s) of the edition? I presented my thoughts first at the international conference of the Society of Textual Scholarship and Textual Cultures (STS), ‘The Objects of Editing’ at the Loyola University in Chicago in 2013 and put them down in writing shortly after. Due to the rather unusual nature of the paper (after all, thought experiments as such are not a common genre of academic text in edition philology nor are they exercised often in literary studies) it took me a while to find a publication outlet that would sit well with both the content and the form.

The article “Editing a Discourse, Not a Text: Meta-Methodological Remarks on an Editorial Endeavour” has now been published in the Journal of Literary Theory (JLT), Vol. 10, Issue 2. Via the publishers website, both the long abstract and the bibliography are freely accessible. The full text can be downloaded via institutional subscription or individual payment, however, as usual I provide anyone with a free copy (.pdf-file) who requests one!

My long term engagement with and work on the subject ‘materiality’ has resulted in a new publication, and I am glad that it is again in an open access, online journal! The article ‘Meaning and Materiality in Literary Studies’ (pp. 39–60) is part of the 2nd issue of the newly established series / thematic journal ‘Schriften zur Kultur- und Mediensemiotik‘, edited by Martin Nies and the Virtual Centre for Culturo-semiotic Research (VZKF), of which I became an associate researcher recently.

Recently, non- and paraverbal properties of literary texts at the level of documentary inscription (i.e. materiality), seen individually or as aspects of a so-called ‘material text’, that is, the union of materiality and verbal sign systems, received an increasing amount of attention in textual scholarship and literary studies. Here, ‘meaning’ or at least ‘semantic potentiality’ has been attributed to both or either and physical features of texts have been construed as hitherto neglected aspects of literary communication and literary aesthetics. In what follows, I will present a brief conspectus of the current debate and then try to provide a reconstruction of underlying ideas by answering the question ‘how does a material text mean?’. Taking a descriptive meta-perspective and focusing on conceptual and methodological clarification, I try to clarify the somewhat blurry expressions ‘meaning’, ‘to mean’ and the like by translating them into the distinct terminology of semiotics and transferring them into the theoretical framework of an instrumentalist notion of signs. 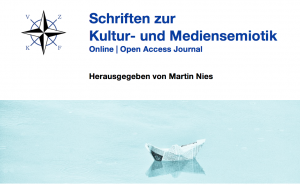 You can read, download, and distribute the complete article as a pdf-file here!

I am happy to announce that my article ‘Paratext’ und Neue Medien. Probleme und Perspektiven eines Begriffstransfers (Paratext and New Media. Problems and Perspectives of a Conceptual Transfer) has been published with the online journal PhiN – Philologie im Netz. It is my first open access publication which makes me especially proud!

You can read the complete article for free here: http://www.phin.de/phin76/p76i.htm. It is in German, though.

Are there paratexts in the realm of new (audio-visual, digital) media; and, if so, which? Focusing on conceptual analysis and terminological clarification, I try to show that any answer to these questions will depend on the underlying definition of the pivotal term ‘paratext’. Someone simply assuming the definitional criteria originally suggested by Gérard Genette will end up with a different answer (and a different set of ‘media paratexts’) than someone putting forward their very own stipulative definition of the term. I argue that, for the sake of communicative clarity and mutual understanding, it is crucial to explicitly bring to mind the correlation between terminological determinations, practical deliberations and empirical research, and to map the prospects of and limits to the conceptual transfer in question.

I have elaborated on the concept of ‘paratext’ in earlier articles, namely the 2009 journal publication Typographie als Paratext? Anmerkungen zu einer terminologischen Konfusion (Typography as Paratext? Remarks on a Terminological Confusion), co-authored with Per Röcken and more recently the 2014 book chapter Video Game Framings. In: Examining Paratextual Theory and its Applications in Digital Culture. Edited by Nadine Desrochers & Daniel Apollon. ()