The Great Migration Has Begun

22. November 2022 · Comments Off on The Great Migration Has Begun · Categories: General · Tags: academe

In July this year, I had my 10th anniversary on Twitter! Hurray! I joined a few days before the DH2012 conference and DHd Unconference in Hamburg in July 2012. Today, I have tweeted 5.449 times, I follow 314 people, primarily academics and alt-acs from the Digital Humanities and GLAM sector, and have a followership of 941. This number is dwindling. A mere two weeks ago, it was closing in on 1.000, a number that was making me proud even.

After the Twitter takeover, there has been a flight of DH academics to a different place: Mastodon. The social networking alternative is decentrally organised, where one joins a server and then connects with whom they find anywhere else in the ‘fediverse’.

So, a couple of days ago, I gave in and joined. My server of choice is fedihum.org, hosted and maintained by the Association of Digital Humanities in the German-speaking Countries DHd. You can find me there now at @arockenberger.

I have requested my Twitter archive but haven’t received it yet. I keep my Twitter account, at least for a bit, while I get used to grazing with the other prehistoric megafauna. Let’s see where the journey takes us! See you on the other side.

As of July 1, I will be working as a research librarian developing the digital humanities strategy at the National Library of Norway in Oslo. Check my updated contact info here.

In April this year I’ve successfully defended my Ph.D. thesis in analytic philosophy of literary studies at the University of Oslo and taught a master class in digital humanities as well as held a guest lecture (remotely) on medieval religious plays and digital simulation and reconstruction within the seminar on digital music studies at the Westfälische Wilhelms-Universtität Münster, Germany.

I will continue my work with the DH Network in the greater Oslo region and with the Digital Humanities in the Nordic Countries Association as well as the EADH. And I hope to continue teaching workshops with the local Software Carpentry Initiative!

For an overview of what I am doing at the National Library of Norway and the collaborations we have nationally and internationally, stay tuned! 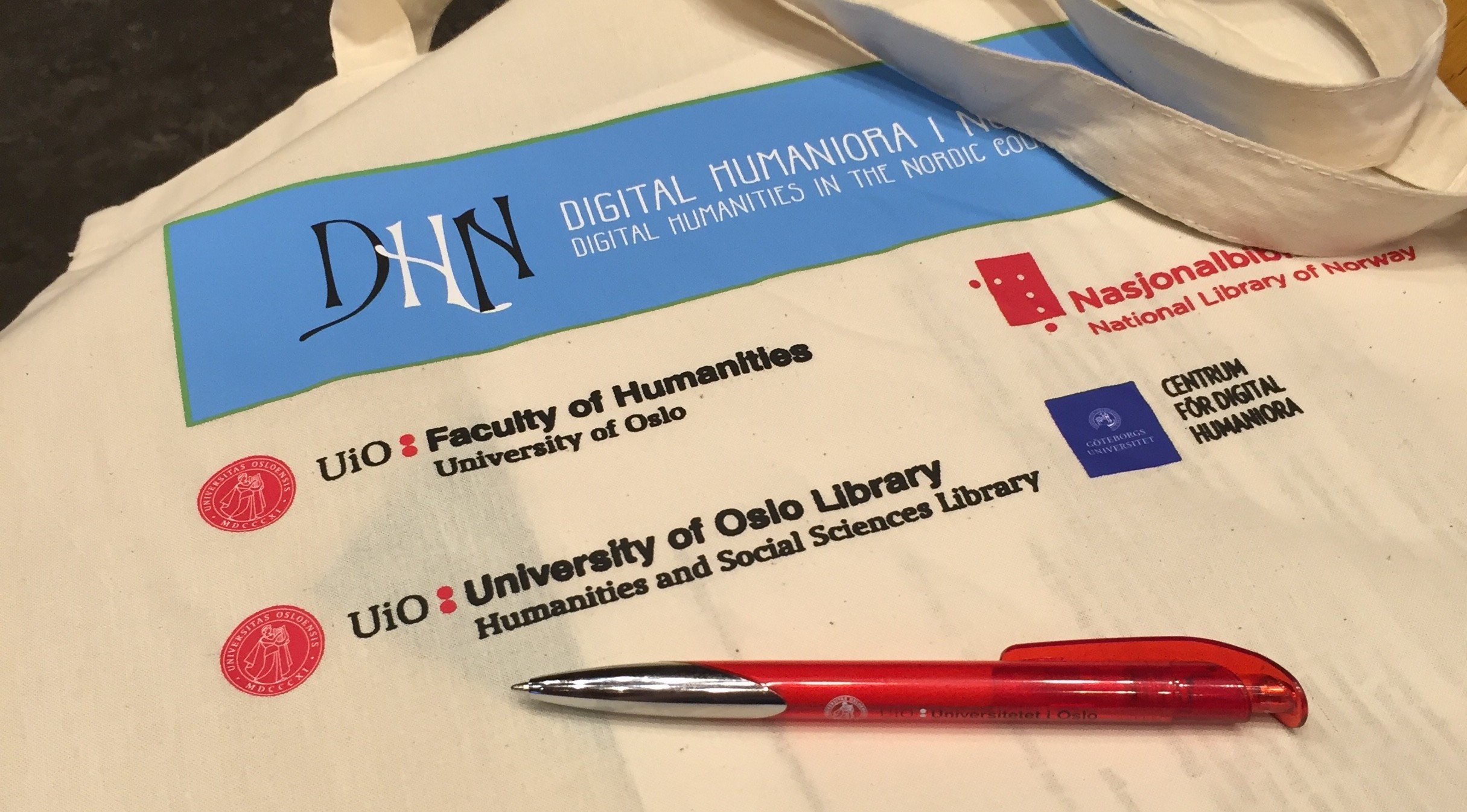 I am exhausted but ever so happy that the first conference of the Digital Humanities in the Nordic Countries Association (DHN), held at the University of Oslo and the Norwegian National Library from March 15 to 17, 2016, was such a great experience and success at various levels! Let me say – again – a big THANK YOU to all the busy organisers and assistants, to my colleagues in the program committee and fellow board members of the DHN, to the keynote speakers and panelists, and not least to all of the 232 (!!!) participants that made this event into a truly memorable ‘kick-off’ of our Nordic collaboration and cooperation in the “meeting place” that Digital Humanities can and shall be.

END_OF_DOCUMENT_TOKEN_TO_BE_REPLACED

This is a work-in-progress, small scale study, inspired by some observations Melissa Terras made in her recent blog post about Frontiers in DH (regarding all-male editorial teams of journals), and a tentative research query of my own that left me baffled. – While I won’t focus on DH journals in particular or the DH community in general (see Scott Weingart’s series of blog posts (parts 1, 2, 3, and 4) on this matter), I will take a look at my own discipline, which is German literature studies, especially, the so called “Inlandsgermanistik” (meaning: German literary studies in the German speaking countries, mainly Germany). I will also draw on my 2014 blog post on gender distribution in German edition philology.

(1) One could expect the distribution of gender among editors and editorial boards to be more or less the same as the general distribution within the academic field in the respective countries (and Germany is one of the worst when it comes to the ratio of male to non-male tenured (senior) professors in the humanities). While the ratio might not be representative of society as a whole and far from what we as the academic community want, it would at least be representative of the field of German literary studies in the German speaking countries when it comes to gender distribution of senior academics. However, ensuing from my own experiences, I expect (2) the gender distribution to be  to the disadvantage of non-male academics and even lower than the ratio in the field. I further (3) suspect, that the majority of leading journals has all-male editorial teams and mainly male editorial boards.

(1) First, I will compile a list of leading German-speaking, German literary studies journals. “Leading” meaning that the journals are well-known, well-distributed (have a high enough number of subscriptions from libraries) and established (meaning, they cannot be recently founded journals; which excludes almost all digital-only journals, though). I aim at a set of ~100 journals; I take my starting point with the collection of journals on germanistik.net. (2) I will than create an Excel-sheet listing all selected journals where I enter the total number of people in editorial teams and consulting editorial boards (and executive editors) and the number of male and non-male persons each. (3) I will calculate the proportion for each journal and (4) compare it to the general gender distribution in the field. (5) I will then try to provide some explanations for the findings and finally (6) draft some normative suggestions on the matter, namely: what we as the academic community (of German literary studies) could and should do about the status quo in regard to gender equality and representativeness in academia.

I plan to do this small scale study ‘in my free time’, without any funding and without an assignment. I will publish the study and its results as a series of blog posts on my personal private blog under a CC-licence. I might, upon request, publish the findings in a more traditional format in a journal at a later date. All research materials will be published on the way under a CC-licence on GitHub (Excel sheets, graphics, drafts).

The material I am going to use might contain some sort of personal data as far as it involves names, professions, institutional affiliations, academic titles and the like. All of this data is already published and openly available. I will use this data, and only the data I can get from journal impressa and editorial notes.

P.S. This post will probably be updated later, if so, I will add a version statement & date at the beginning!

The New Faculty Board at the Faculty of Humanities

03. March 2015 · Comments Off on The New Faculty Board at the Faculty of Humanities · Categories: General · Tags: academe

This will be a quick one!

Why I Run for Faculty Board at The Faculty of Humanities

08. November 2014 · Comments Off on Why I Run for Faculty Board at The Faculty of Humanities · Categories: General · Tags: academe

I have been nominated as candidate for the fixed-term academic staff (incl. PhD fellows) to run for the faculty board at the Faculty of Humanities, University of Oslo

The election platform with more info can be accessed here, the election takes place 17.–23. Nov., electronically.

END_OF_DOCUMENT_TOKEN_TO_BE_REPLACED

The Future of the Humanities (at the University of Oslo) Is Digital. Or Isn’t It?

A little while ago, I have been interviewed for a piece on digital humanities: at the University of Oslo and ‘in general’. Although I am not a 100% happy with the article, I heard back from a number of people who either liked it and thought it to be informative or thought it would make a good starting point for further discussion. This interview is the latest in a series of articles about dh (here, here and here), and thus gives reason to believe that dh is becoming more and more visible.

The dh network at UiO – founded in June 2013 and officially going public in April 2014 with a wide-range dh project presentation – started a series of events in September 2014: the DHF (dh forum) with bi-weekly meetings, hosted by the university library; a DH Lunsj in the alternating weeks; and a weekly DH reading group, hosted by the Ibsen Centre.

More and more researchers, technical staff, and students enlist in the official mailinglist of the dh network (we are now 2 subscribers short of 100 members), the number of conferences, seminars, workshops, project presentations etc. that are announced and distributed via the mailinglist increases steadily. As does the collection of links to dh projects at UiO and to the people who run them.

With the forthcoming election of the new dean of the faculty of humanities, dh and the possibility of a dh centre is now also a political topic: both candidates, Jens Erland Braarvig and Arne Bugge Amundsen and his team highlighted dh and pointed out that this topic has to be taken seriously if Norway’s largest humanities faculty is to continue to be among the highest ranking, nationally and internationally. UiO and the faculty of humanities have at the moment three dh ‘services’, the EDD group (Unit for Digital Documentation), the DMLF group (a specialised group at the IT-department) and Tekstlab (the Text Laboratory) which very recently have been evaluated – with a very disappointing conclusion. However, the dh network composed a commentary that, among other things, emphasised the need for a dh centre: a waking call to the current and the new leadership.

Even if the notion of the “digital future” of the humanities is disputable – it should go without saying that there will be digital humanities, whether they will incorporate or assimilate the ‘traditional’ humanities, or complement them, or just be an alternative mode of doing humanities research & teaching. One of the many challenges in the next years here at UiO will be the discussion not of the ‘if’, but of the ‘how’ to deal with dh in a future, that will be both, analogue and digital.

This time I’m at the 15th international conference of the Association for German Scholarly Editing (Arbeitsgemeinschaft für germanistische Edition, short AG-Edition) – titled “On the Uses of Editions” – held at the RWTH Aachen, Germany, and hosted by the institute for German Studies and Literary Studies and its current head of department, Thomas Bein.

I participated in the last 3 “big” conferences of the AG-Edition (2008, 2010, 2012) and one smaller one (2011) and presented at 2 big ones and gave a plenary talk at the smaller conference, and I’m acquainted with a lot of my fellow editors, textual scholars, and philologists (and musicologists). However, this time I perceived the event in a somewhat different light, perhaps (also) because of the many voices of outrage on blogs and twitter (#allmalepanel) by fellow academics bitterly pointing out the still unequal ratio of male and female persons in academia, especially in the humanities.

A quick glance at the audience and list of presenters confirmed the general observations in the field. However, I don’t want this to be just about an all subjective impression, so I will provide some numbers.

1. I analysed the updated and edited pdf-version of the printed programme & conference schedule with regard to gender of the presenters (Sektionsvorträge), the panel chairs (Moderation), the keynote speakers (Plenarvorträge), and named organiser(s). The programme is online here (pdf).

2. I also looked at the female/male-ratio in co-presentations (there were not that many since this is still uncommon in the German humanities context),

3. and I looked at – if they were talking about author editions or historical editors – at the gender of these actors.